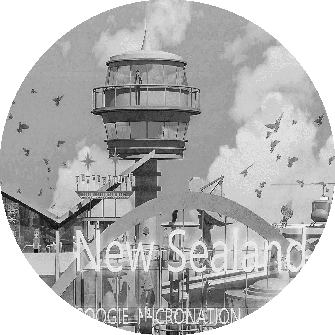 New Sealand, closely related to the concept of micronation, was born as a dream of freedom, an experiment that idealizes the future but does not want to stop working to meet the expectations of that admired future. Like any googie of its own, with its feet on the ground and looking at the sky, all the ingredients that will form part of this experiment, which takes place on a naval defence platform abandoned about 20km from the English coast, are carefully chosen. Then, born from a collection of our concerns and interests, both as future architects and as people, one by one were emerging the unique characters, already mature and far from being simple concerns begin to colonize the place and end up owning the experiment. In this context, architecture is a container and content, an ecology that facilitates interactions between people, technologies, machines, nature, art, music, colours, flavours, dreams and nightmares, etc., all of which are disordered and harmonised from the subjectivity of time. This gives each personality the capacity to judge the suitability of the designs, which far from being static, become an anonymous poem made by all and yet to be made, which is perfected in time thanks to the modifications and contributions of each inhabitant. And this poem, this architecture in which they coexist, turns out to be the point where people converge and the community emerges, the nexus of union of such disparate identities that with discrepancies and affinities, work in collaboration so that this community is the best version of itself, and from there lay the foundations of a future that admires progress and trusts technology and advances the role of providers of well-being and strength, which is in a way the same future that the googies dreamed of and never arrived. The world is hopelessly broken, but it is also so big and so full of people that it would be wearisome, and despite any effort, also impossible to put it back together. In this circumstance the important thing is not the discovery of these fragments, but what we each do with them, because in part that is what defines us as people.